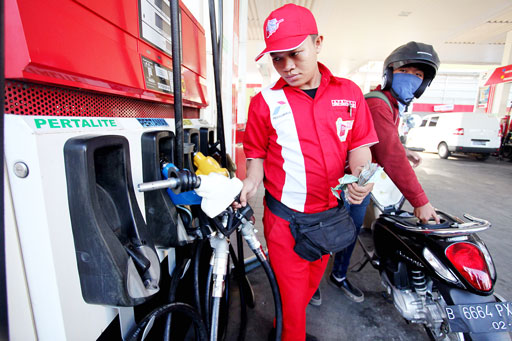 State-owned oil and gas firm Pertamina introduced on Friday its new gasoline product called Pertalite, which allows motorists to have an additional fuel option other than conventional ones.

The move marks the firm’s effort to diversify its raw material sources by using less valuable substances from its refineries.

The fuel product, with an octane rating of 90, will initially be sold at 101 gas stations in Jakarta, Bandung and Surabaya as well as on toll roads across West Java, according to Pertamina president director Dwi Soetjipto.

“We are currently conducting a market test before we decide to extend it to other areas,” Dwi said during a launch event in Jakarta. Dwi cited Bali as a potential area where it could later expand its sales.

During the market test period that may run for a few months, it would supply 500 kiloliters of Pertalite each day to the designated stations, he added.

Pertamina’s move comes at a time when it is struggling with an overhaul at its processing facilities and a governmental plan to develop some new refineries.

To make Pertalite, the firm blends a refinery product called naphtha with a high octane mogas component (HOMC). The largest part of locally-made naphtha, which has a low octane rating of 60 to 70, is now exported.

Dwi further said that Pertalite would be produced at its refineries in Balongan, Indramayu, West Java, and Cilacap, Central Java.

“We will seek to increase production from other refineries too, but we need to upgrade [them first],” he said.

The delivery of Pertalite may also give a boost to the firm by reducing its fuel imports.

Once a member of the Organization of the Petroleum Exporting Countries (OPEC), Indonesia has been struggling with dwindling crude oil supplies as most of its fields are now depleted and its refineries are old.

Currently, domestic production can only fulfil 50 percent of a 1.6 million barrel-a-day of national oil production target.

Pertalite is sold at Rp 8,400 (62 US cents) per liter, but the retail price may be raised or lowered in line with market demand, according to Pertamina’s marketing director Ahmad Bambang.

The new fuel product will then compete with government-subsidized Premium with a research octane number (RON) of 88. Premium is currently sold at Rp 7,400 per liter.

This will also broaden Pertamina’s product portfolio, which includes Premix RON 92. Premix’s price fluctuates according to world oil prices and now is sold at Rp 9,300 per liter.

“We will evaluate sales every two weeks and price changes
could happen within this period,” Ahmad said.

On the first day of the launch, customers welcomed the presence of Pertalite, buying it for various reasons. Most of them tried the new gasoline only to see how it differed from either Premium or Premix.

However, some also bought it because they were unsatisfied with the other two types of gasoline.

Bandung resident Iqbal Kusumadireza, 30, said that he purchased Pertalite because Premix made his vehicle’s engine hot.

“I normally used Premix but my motorcycle’s engine gets very hot. Now we have Pertalite and I’m giving it a try,” Iqbal said. (saf)