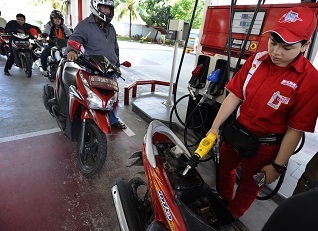 Jakarta - Pertamina, the state-owned energy firm, plans to boost efficiency in order to recoup the $212.3 million net loss it posted in January and February.

In the first two months, the company was selling oil reserves from October — “when the price was still expensive” — at a lower price, Pertamina director general Dwi Soetjipto told the House of Representatives on Monday.

Pertamina posted a $368 million loss from its downstream business during the period, but it gained $130 million from its upstream ventures. Additionally, the company earned $41 million from its renewable energy division and $2.5 million from other businesses.

In order to recoup the company’s loss, Dwi said the company will become efficient by centralizing the oil procurement process, which is expected to cost $30 million. It also seeks to reduce losses in distribution to 0.2 percent from 0.4 percent, he said.

Other measures include continually controlling oil inventory, putting a moratorium on new workers’ recruitment until the company’s performance improves and being more selective in exploratory drilling.