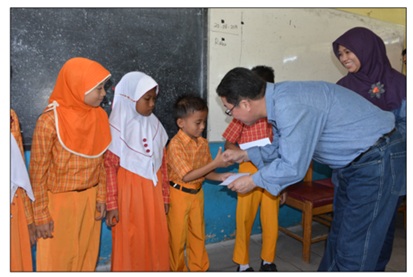 Dumai - PT Patra SK through its CSR program of 2014 has awarded scholarship to students in Dumai, especially for students from schools in TanjungPalas sub-district, Jaya Mukti sub-district, SMK TarunaPersada and orphans.

The scholarship was given to elementary to high school students with the total 975 student : 445 students area from TanjungPalas and Jaya Mukti sub-district, SMK TarunaPersada and 530 students from 12 orphanages in Dumai.

The scholarship is expected to help the students who need financial supports to improve their performance and to finish their education. The assistance is given in form of shoes and school supplies.

The scholarship hand-over to the orphans was symbolically conducted on August 11th, 2014 at Al-Furqon orphanage by Chief Operating Officer (COO) of PT Patra SK, Mr. SohnHoontae, While the scholarship for students from schools in TanjungPalas and Jaya Mukti sub-district, and SMK TarunaPersada was conducted on August 20 – 22, 2014 in each school. Mr. SohnHoon Tae, in his speech gave motivation to the students in order to study hard and never give up to achieve their dreams. He also expresses his deepest gratitude to the school committee for its cooperation to make scholarship program run well.