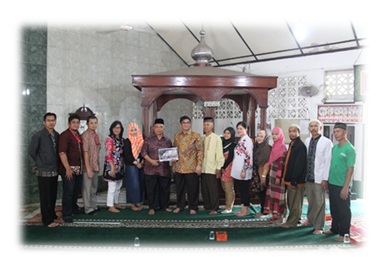 Jakarta - As his case a man who is a social creature and cultured, PatraSK as the company also has a social and cultural level is quite high. PatraSK upholds and respects all individuals, groups of up to different cultures in the workplace, and the environment outside the company.

Handover ceremonial for the donation is very simple but solemn, it was conducted on Friday, October 3rd 2014 located at Masjid At Muttaqien - North Jakarta. The procession was attended by representatives of the Board of Directors PatraSK Jakarta, HR & GA Department and Secretary team, while from the mosque’s foundation party was attended by the Chairman Masjid At Muttaqien, Mr. Haji Nawawi Toha, Mr. Haji Sarbini, accompanied by other mosque officials. The donation is given directly as symbolically by CEO of Patra SK, Mr. Ardhy N. Mokobombang to the At muttaqien Mosque Foundation Chairman, Mr. Haji Nawawi Toha.

Hopelly the donation had made it to who was really needed in accordance as the purpose, and on the next year Patra SK could give donations which better than 2014’s.