HollyFrontier and Calumet are raising postings for their API Group I heavy-vis cuts, joining ExxonMobil and Paulsboro, which had initiated similar moves last week.

Just last week, on May 8, ExxonMobil was heard to have increased prices for its Core 600 cut by 20 cents/gal, and Paulsboro communicated that it would also be lifting its SN500 and SN700 cuts by 20 cents/gal, with an effective date of May 13.

Tight availability and healthy demand for the heavy-viscosity grades were behind the price hikes, as well as the upswing seen in crude oil values, sources explained.

Group I suppliers agreed that requirements for the heavy ends had multiplied over the last few weeks, both in the domestic market, as well as on the export front, limiting spot availability and allowing some suppliers to focus only on contractual obligations over the next few weeks.

Bright stock in particular has experienced a boost, both in terms of demand and pricing, with a couple of rounds of price hikes lifting values between mid-April and mid-May.

Market participants agreed that strengthening crude oil futures were placing pressure on all base oils, but the lighter grades were receiving slightly less support for a potential price increase because availability remained plentiful.

The slimmer margins on the light-vis side were also offering additional incentive for producers to seek increases on the heavy ends, sources commented.

Naphthenic base oil producers have also been following developments on the crude oil and feedstock fronts with a certain degree of concern, as margins are being squeezed. However, despite growing pressure from climbing upstream values, no pale oil price movements were heard this week.

A producer on the West Coast commented that a shortage of gasoline has caused vacuum gasoil numbers to skyrocket; VGO trading in a range of $2.49-$2.55/gal is exerting a significant amount of pressure on base oil numbers. This means that some producers may either have to adjust base oil prices, “or reduce base oil output, save the processing cost, and move VGO out at better numbers,” the supplier explained.

Demand for pale oils has picked up during the spring season, but inventories were said to be fairly balanced against requirements.

West Texas Intermediate (WTI) futures inched up as a weak dollar lifted commodities denominated in the currency, and OPEC revised up its forecast for global crude demand growth. Ongoing violence in Yemen also placed pressure on oil prices as concerns over the security of Middle East crude supplies lingered. 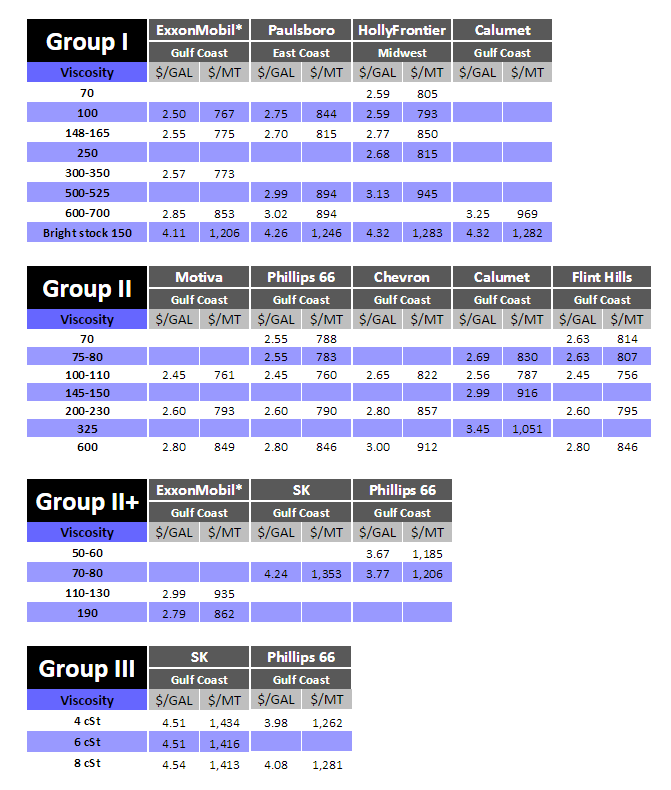