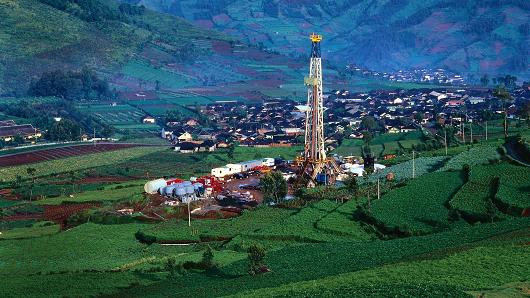 Indonesia is reactivating its membership of the Organization of the Petroleum Exporting Countries in December, OPEC said on Tuesday, which would add almost 3 percent to the group's oil output already close to a record high.

The southeast Asian country would be the fourth-smallest producer in the Organization of the Petroleum Exporting Countries ahead of Libya, Ecuador and Qatar, and bring the number of participants to 13 countries.

Indonesia was the only Asian OPEC member for nearly 50 years before leaving the group at the start of 2009 as oil prices hit a record high, and rising domestic demand and falling production turned it into a net oil importer.

In a statement, OPEC said Indonesia's request to reactivate its full membership was circulated to OPEC members and following their feedback, OPEC's next meeting on Dec. 4 will include the formalities of reactivating its membership.

"Indonesia has contributed much to OPEC's history," the statement from the group's Vienna headquarters said. "We welcome its return to the Organization."

Indonesia's Energy Minister, who OPEC said will be invited to December's meeting, told Reuters earlier on Tuesday the country would return as a full member.

The development is no great surprise as in OPEC terms Indonesia never really left. OPEC termed its departure a "suspension." Ecuador, which rejoined in 2007, set a precedent for a return from suspension. OPEC sources made clear the door was always open.

Indonesia's status as a net importer had raised the question of whether it would return as a full member given that OPEC's Statute says any country with a "substantial net export of crude petroleum" may become a full member.

OPEC pumps more than a third of the world's oil and is engaged in a defense of market share, having dropped its long-standing policy of cutting output to support prices in November 2014.

The addition of Indonesia's output will boost OPEC's production by about 2.6 percent based on July output figures towards 33 million barrels per day (bpd) - far in excess of OPEC's 30 million bpd official target.

OPEC output has not been above 32 million bpd since 2008, before Indonesia's exit.

Indonesia produced 840,000 bpd in July, according to the International Energy Agency, and OPEC pumped 31.88 million bpd in July according to a Reuters survey - the highest monthly rate on record from the current 12 members.